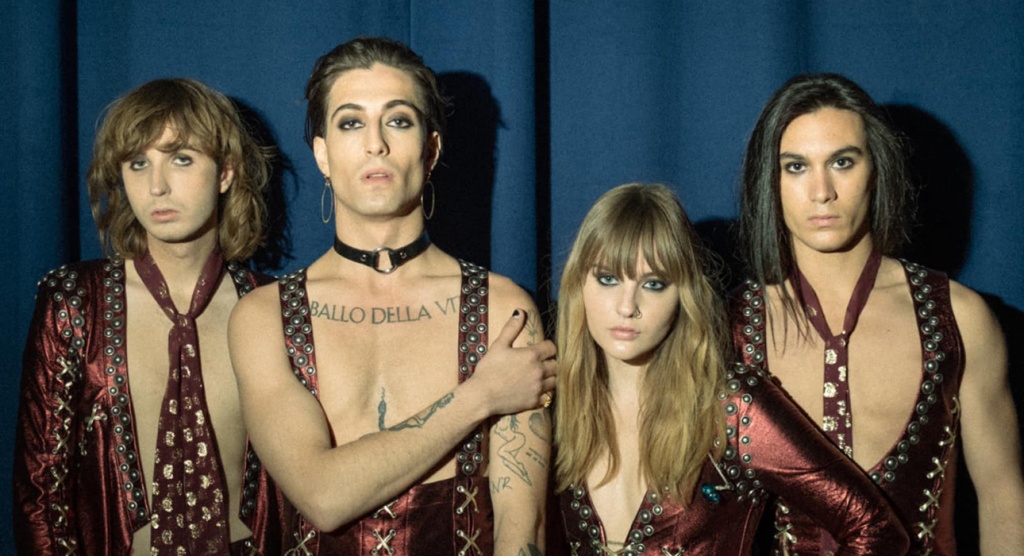 The public sale of tickets for the concert of the phenomenal Italian band Måneskin, which will take place onn May 18th, 2023 at Arēna Rīga, already started throughout the “Biļešu serviss” network (www.bilesuserviss.lv).

Since about a higher total capacity was agreed with the band’s management, a number of additional tickets will now be available for sale. This is, of course, great news for those who failed to buy it in the huge hype of last autumn. However, do not postpone the purchase, because in the fall all tickets available at that time were gone within 3 hours!

“We’re so thrilled to be able to finally tell you that our LOUD KIDS tour got sooooo much louder, truly worldwide!! The LOUD KIDS tour gets louder and will actually see our very first headline tour in the US. All our rescheduled European Indoor dates have been upgraded due to demand + we’ve added some new ones for all of you who missed the chance to get their tickets.

Of course, it is very difficult to make show announcements while the horrific war in Ukraine goes on and innocent people are suffering. We are devastated for the Ukrainian people and we stand with them in solidarity. And due to the decisions of the people in power, that affect the lives of so many innocent people, we will not go ahead with our Russian dates. We all need to stand together for peace, now and always.”

Måneskin became the first Italian rock band to reach the top 10 on the UK Singles Chart, with their 2 songs and only the second band in the history of Eurovision to feature the Billboard Global 200 Excl. U.S. chart. With 7 diamond discs, 161 platinum and 37 gold, millions of streams and views and views on such platforms as Spotify, iTunes, YouTube, Deezer, etc the Italian rockers have cemented their global status in some of the largest music markets around the world.

A band that, after a break of so many years, proved that, in the context of Eurovision, we can once again speak not only of a temporary glimmer, but of a global march of fame. Moreover, such a recognition has not achieved by a classic pop, but a rock band. And now they will perform in Riga!

Måneskin was officially founded in 2016, although some members of the group were already known during high school. Vocalist Damiano, bassist Victoria, guitarist Thomas and drummer Ethan met and chose the name Måneskin or “moonlight” in Danish at the suggestion of Victoria, who is of half Danish origin.

Their sound is characterized by a combination of the music influences: a mix of rock ’n’ roll, rap/hip hop, reggae, funky and pop, all held together by lead vocalist Damiano’s soulful voice.

They started their musical career as buskers by playing in the streets of Rome, until in 2017 they entered the 11th season of the Italian version of the talent show “X Factor”. As a result, the 2nd place and the first serious concert tour, in which, despite still a young age and little experience, presented themselves very convincingly. Chosen, their debut single that was released during the show, boasted several million streams and views and was certified double platinum. The same title debut EP, released in December 2017 was certified platinum just two months after.

All the dates of their their first 21-date spring tour (February/April 2018) sold out in a few hours.

A little before then, in March 2018 the single Morirò da Re (three-times platinum) was released, followed by Torna a Casa (five-times platinum). These tracks paved the way for the new LP album “Il Ballo Della Vita” entirely written by Måneskin, which was released on October 26, 2018. The record made its debut at #1 on the FIMI/Gfk chart with four singles earning a spot on the Top Ten and, less than two hours after its release, it peaked to #1 on iTunes, cracking, just a day after its release, theSpotify TOP 50 with all its songs and hitting 1 million streams in less than 24h. Something unheard of for an Italian band!

Winged by the success of the album, in 2019 Måneskin goes on the Il Ballo Della Vita European concert tour, which, in addition to his native Italy, includes cities in Spain, France, Belgium, Switzerland, Germany and even United Kigdom. In total, the band gave more than 70 sold-out concerts in 2019.

From late 2019 until spring 2020, the band lived in London where they worked on their music style and new material. As a result, in mid-March 2021 the second LP titled “Teatro d’ira: Vol. I ” was released and it again reaches the status of platinum.

While that, in early March 2021, with the now well-known hit Zitti e Buoni Måneskin win the Sanremo Music Festival, but in last May triumphs at the Eurovision Song Contest.

The video for the hit I Wanna Be Your Slave, released last July, garnered enormous 6.7 million views in just 24 hours, becoming the most watched music video in 67 countries around the world.

Last fall was super busy for the band.

In September Måneskin, alongside such stars as Ed Sheeran, Elton John, Black Eyed Peas, Doja Cat and row others, were invited to Paris to perform at “Global Citizens Live” project. Later they were guests of the TV shows of Jimmy Fallon Ellen DeGeneres, performed at MTV Europe Awards (won The Best Rock act nomination), supported the Rolling Stones in Las Vegas, and performed at completely sold out concerts in US and UK.

And now finally the next spring we will have an opportunity to see their amazingly energetic show in Riga!